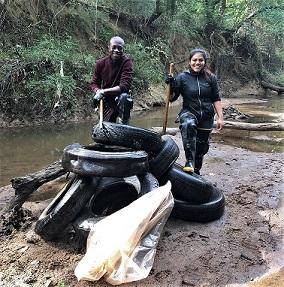 Rivers Alive is Georgia's annual volunteer waterway cleanup event that targets all waterways in the state, including streams, rivers, lakes, beaches, and wetlands. The mission of Rivers Alive is to create awareness of and involvement in the preservation of Georgia's water resources. Rivers Alive is held annually each fall and is a program of the Georgia Environmental Protection Division Outreach Program.

In the early 1990s, well before Rivers Alive was founded, former Georgia Department of Natural Resources (DNR) Board Member Curtis Farrar first presented the concept of a statewide river cleanup event. In 1992, the first large-scale cleanup was organized by the DNR Wildlife Division, which focused its attention on the Oconee, Ocmulgee, Satilla, and Alapaha watersheds.

By the mid-1990s, river cleanups became more widespread, with a number of different governmental and non-governmental organizations conducting small cleanup events throughout the year. These organizations had little to no collaboration with one another and typically focused on particular regions or watersheds within the state. One of these organizations was Georgia Adopt-A-Stream (AAS), Georgia’s volunteer water quality monitoring program. AAS quickly became the lead program spearheading the annual river cleanups, and by 1999 announced the creation of its sister program, Rivers Alive.

Rivers Alive served to combine all of the various cleanups across the state into a single, unified annual cleanup program. These original cleanups were set in the second week of September to coincide with date of the passage of the Clean Water Act (though now cleanups are celebrated all throughout the fall). The formation of Rivers Alive made it easier for cleanup organizers to receive supplies and materials, funded by corporate donations, as well as consolidate the cleanup data across the state. The program also partnered with the International Coastal Cleanup, a program of the Ocean Conservancy, to stretch its efforts to the coast.

Rivers Alive has seen tremendous growth since its founding over 20 years ago. Its success stems from both the event organizers across the state who put in the time and effort to arrange cleanups in their areas and the Rivers Alive Advisory Board who dedicates countless hours fundraising, creating educational materials, and planning community outreach efforts. The program’s continued success is also dependent on a strong volunteer base that is concerned about and prepared to take action to protect their local waterways. Everyone who participates in Rivers Alive, in whatever capacity, is working to help keep our rivers clean and healthy, and we thank you for all that you do!

To view cleanup results from each year, check out the Cleanup Results page and Rivers Alive annual reports.